Continuing with this writing thing. I want to write this week about my experience with meeting His Holiness Pope Tawadros II, Pope and Patriarch of the Coptic Orthodox Church. I honestly did not know what to expect. I had been counting down until his arrival to Los Angeles. He has been a pope for almost 3 years now and had not yet visited the United States. Pope Tawadros II came to be our Pope after the thrice blessed Pope Shenouda III passed away. The late Pope Shenouda in his later years had become increasingly ill and his visits to California became very limited. It has been almost a good 10 years since I last saw the Pope. There was much excitement awaiting to see His Holiness Pope Tawadros II.

Day 1 – Reception at St. Mark
As soon as I arrived to St. Mark Coptic Orthodox Church in Los Angeles, the excitement further increased. There were many priests who travelled from the East Coast. I was able to connect with many priests that I had known when I was a child. I won’t forget the moment His Holiness arrived at church that day. I was so full of joy, so full of excitement that I could not find a way to express my joy, other than by clapping my hands! Traditionally, we try to refrain from clapping our hands in church. I never understood why people couldn’t just contain themselves and be joyful internally without clapping. I couldn’t contain myself (nor could anyone else in the church that night). His Holiness arrived and prayed the Thanksgiving Prayer and the night continued with a small spiritual talk. The spiritual talk was simple and to the point. He spoke about the number 5 and how it refers to strength and power. He spoke that, for us as Christians, we need to keep within our hearts, 5 jewels: my faith, my Bible, my church, my purity and my eternity. We must always keep these 5 jewels in front of us as we live day to day. (If you want to hear the actual sermon, link is provided at the end of the post). I was also able to get my first selfie picture with His Holiness! 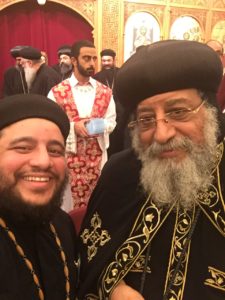 Day 2 – Clergy Meeting
Over 125 priests gathered for a clergy meeting with His Holiness Pope Tawadros II. I think that was the first liturgy I attended that had that many priests gathered for a Liturgy in one setting! His Holiness allowed for all of us to pray the Divine Liturgy with him. Each attending bishop and priest, prayed a few words of the Divine Liturgy. Usually, in these meetings, it’s a choppy liturgy as you wait for each person to approach the altar and pray their portion. But regardless it was still a great sight to see that all of us were gathered together and praying in one spirit. His Holiness gave a sermon that day on the gospel reading (Luke 11:53-12:12). The Gospel reading mentioned sparrows and he explained that a bird needs two wings to fly and that we also need two wings in everything in our spiritual lives. We need both the Old and New Testament when it comes to our Bible. We need both the Sacrament of Confession and the Sacrament of the Eucharist. We can’t have one without the other. There are many more examples that His Holiness provided which are provided in the links below for more listening. It was a long day, but fun-filled nonetheless.

Day 3 – Youth Meeting
I attended the English Youth Meeting that night with His Holiness. I was on the stage, off to the side, sorting through all the questions that were being sent to him. We decided to use a different system of accepting questions, rather than just using pieces of paper each time. It was decided to have everyone text their questions to a certain phone number to make the process easier and quicker. That night, I had to filter as quickly as I could through 400+ questions! Another priest, Fr. Gregory Bishay, was there to translate all the questions and answers from His Holiness to the youth. It was a funny night watching the two of them interact, as there were many funny jokes about translation that night. Many of the questions that came up were in regards to our spiritual life and celebration of the feasts. His Holiness mentioned to us that he has proposed to Pope Francis to work together on setting a fixed date for the Feast of the Resurrection. It was refreshing to hear the churches working to unite to celebrate together. I do want to highlight on another observation that I saw that night. There was a group of youth (part of a band) who were singing worship songs. But, I noticed in the room that no one was taking part or singing along with them. Although the words were on the screen, no one participated. Shortly after, I noticed that a decision was made to start singing the hymns of the church from the Midnight Praise. Suddenly, the room got quiet and everyone started singing the Coptic hymns of the church. We didn’t have the hymns on the screen for anyone to follow. Most people pulled out Coptic Reader and read from there. I am not here to start a mini-battle about praise, worship, hymns, or songs. I just want to state an observation that I saw and pretty much “put it out here”.

Day 4 – St. Athanasius and St. Cyril Coptic Orthodox Theological School
By the grace of God, I wasn’t sure if my schedule was going to allow me to attend the last event that I would personally be able to see His Holiness at. But, everything worked out, and I was able to attend. It was a day of full of blessings. The presence and blessings of His Holiness Pope Tawadros II had a great impact. CST (Claremont School of Theology), CGU (Claremont Graduate University) and ACTS (St. Athanasius and St. Cyril Coptic Orthodox Theological School) all signed MOUs (Memoranda of Understanding). This signing would now enable all our ACTS students and graduates to take courses in CST or CGU, have access to the libraries including the Ernie Tune Coptic Collection, as well as to pursue advanced masters degrees in both universities. It was a big step for the ACTS theological school. My family and I were also able to snap a few memorable pictures with His Holiness.

Overall, receiving the blessings of His Holiness during that week, though it was hectic, gave me a renewal again. There was no time for in-depth, one-on-one conversations during this visit. But, just the sheer fact of being in his presence gave comfort. His Holiness has this calmness that surrounds him and to be near him, to see his interactions, hear his sermons, you realize that as his name “Tawadros” means, he truly is a gift from God. I hope we get to see him more often and take his blessings soon again.

For those who were unable to attend, I have attached a list of a few of the video feeds that I could gather.