]Would you like me to take your picture? That’s how it started, one line, one question, one request. This past weekend, my wife and I were celebrating our five-year wedding anniversary. With all our responsibilities, we decided a small local weekend getaway would suffice this year. We enjoyed a wonderful day at the various parks playing with our son, and then at night, we went out to dinner at a small restaurant in Little Italy, called Buon Appetito followed by Pappalecco for dessert. Both are fantastic places if you are ever down in San Diego. 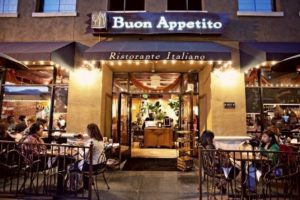 Moving along with the story. I don’t necessarily believe in accidents or coincidences. I believe that everything happens according to God’s plan. For I know the thoughts that I think toward you, says the Lord, thoughts of peace and not of evil, to give you a future and a hope (Jeremiah 29:11). In that sense, no matter where you go in life, or whatever happens, or the interactions you may face, God has a plan.

My wife and I were seated at the restaurant, patiently reviewing our menu and deciding what to order. As we were waiting and reminiscing about our first five years of marriage, an elderly couple were seated adjacent to our table. Side note: The spacing in the outdoor seating between tables is enough for the waiter/waitress to walk through, so your table is fairly close to others. As the two of us continued conversing, we noticed the gentleman trying to take a picture of his wife. Without a second thought, my wife said a line that would change the remainder of our dinner.

The amount of joy in the couple’s voices was instantly noticed! They happily smiled for the camera, and even offered to take our picture after. We cheered and enjoyed. That one line sparked a night of conversation about God, religion, faith, and current church issues. The elderly couple (Alton and Loretta) were from the South and were raised in the Roman Catholic Church and discussed how their parish had grown and spun off into sister parishes because of the intense size of the parish. Their current parish size…..8,000 members!

As the night continued, we also discussed baptism, chrismation, and the type of “worship” that is occurring in other denominations. It was refreshing to see someone from another church with such vigor and love concerning the church. One of our fun conversation pieces were about language, and how Alton had learned Latin because he was an altar boy, and everything for him was in Latin until Vatican II changed that. I enjoyed our discussion concerning the different service ideas for children and how it’s important to focus on the youth of a parish.

It was a great night. We exchanged information and they informed us, that they would be visiting Palm Springs earlier next year, and would love to stop by the Coptic church and have dinner with us again. The next time you are outside, whether at a restaurant, or elsewhere, don’t feel shy to spark a conversation… or ask, “Would you like me to take your picture?” You never know what conversations may come up and how much meditation they can provide.

For me personally, there was a spiritual thought that was troubling me that day, and I couldn’t figure out the situation. Throughout the dinner with my wife, and the exchange with Alton and Loretta, the answers that I needed became more apparent to me. Everything happens according to God’s will and timeline.